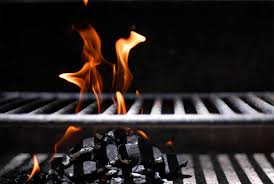 This really cool post provides 10 useful hacks for your BBQ including how to make your old BBQ look like brand new or how to make a DIY BBQ.

Refurbish or repair an old BBQ: Simply adding a coat of Krylon Stove or BBQ paint will help make your dingy old BBQ look like new.

Deep clean it: Doing this to your BBQ at least once annually will go a long way. Giving it simple and regular coffee baths produces even better results.

Add side tables: Bolt some wooden TV trays to the side of your BBQ so your tools stay within arm’s reach.

Transform your BBQ into a smoker: Utilise an aluminum pan filled with water so your BBQ not only chars meat, but also smoke it to perfection.

Turn your BBQ into a pizza oven: Some Weber BBQs also function as a pizza oven. If you’re into homemade pizza, this is well worth the investment.

Turn up the heat: Lava rocks and chimney starters help your BBQ handle loads such as wok and meat cooking.

Add handles to your BBQ grate: You can do this with the help of several bolts and some hardware.

Go the DIY route: No need to fret if you don’t have a traditional BBQ. You can turn a simple beer keg, tin can, lasagna pan, or old tool box into your own makeshift BBQ.

Always know your gas levels: Try this simple water trick so you’ll know the propane levels of your gas tank.

Become a BBQ master: One trick is to lay out the charcoal in a specific manner so you create several heat zones in your BBQ. Knowing when to remove foods off your grill is also an art in itself.

Other tricks include grilling chicken under a brick, spiral-cutting hot dogs, quick-freezing the steak, barbecuing thick steaks at a low heat initially, and cooking sausages straight on the grill.

We invite you to explore our innovative range of products created from over 20 years of experience. Freedom Retractable Screens® – Innovative insect screens for modern Australian living!